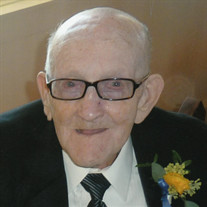 Willie Colenso peacefully passed away in Spokane, Washington on April 16, 2016, surrounded by his loving family. He was born September 1, 1919, in Butte, Montana and was one of 11 children of Bert and Bessie (Davey) Colenso. He attended local schools and graduated from Butte High School in 1940. He served in the U.S. Army Air Corps from 1942 to 1946. Willie and Irene Quinn were married on May 22, 1946. They were married for 64 years until Irene’s passing in 2010. Willie was employed at Bertoglio Storage and Appliance from 1947 to 1949 and then he began a long shift as a miner at various mines, including the Kelley, Mountain Con and Steward Mines, retiring in 1979. He really enjoyed participating in the First Aid Contest at the Columbia Gardens during the celebration of Miner’s Union Day. Willie was proud of being a life long member of the Race Track Volunteer Fire Dept. He enjoyed sports, especially horse shoes, and was a loyal fan of the New York Mets and the San Francisco 49ers. He also devoted many hours to coaching youth baseball and football teams. Family was Willie’s number one priority and pride, spending quality time attending sporting events of his own children and then of his grandchildren and great grandchildren. Willie was preceded in death by his parents, Bert and Bessie; his wife, Irene; daughter, Lois Jean Colenso; his ten siblings - most recently his brothers, Ernie and Stanley (Marie) and his sister, Edith Drake; brothers-in-law and sisters-in-law, Jack and Marie Carey; Jean Quinn; Pat (Sonny) and Patricia (Jim) Quinn; Jack and Mary Fran Quinn and several nephews and nieces. Families who will carry on without Papa Willie and who will miss him beyond words are sons and daughters-in-law, Bill and Linda Colenso, Great Falls; Don and Judy Colenso, Spokane, WA; daughter and son-in-law, Marilyn and Jack Willoughby, Butte. Grandchildren are Toni and Bob Hunt (Zach, D.J. and Marcus) Butte; Staci and Nate Manos (Isabelle and Chloe) Spokane, WA; John and Kledia Colenso (Connor and Caitrin) Missoula; Kate and Jon Hasenbank (Adam and Sophie) Allendale, MI; Pete and Sara Colenso (Kali and Kelsey) Great Falls; Jason and Tara Willoughby (Kailub) Butte; Janel and Ben Palmer (Emma and Nicholas) Minot, ND. He also is survived by brother-in-law and sister-in-law, James and Dorothy Quinn, Helena; and several nephews and nieces. In lieu of flowers, donations may be made to Shriners Hospital for Children – Spokane, 911 W. 5th Ave., Spokane, WA 99204 or to Our Lady of the Rockies.

Willie Colenso peacefully passed away in Spokane, Washington on April 16, 2016, surrounded by his loving family. He was born September 1, 1919, in Butte, Montana and was one of 11 children of Bert and Bessie (Davey) Colenso. He attended local... View Obituary & Service Information

The family of Wilfred John Colenso created this Life Tributes page to make it easy to share your memories.

Send flowers to the Colenso family.