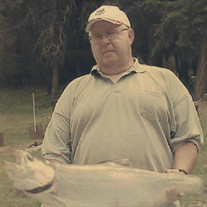 William Alex Fetters passed away Thursday evening, August 26th, 2021 at St. James Healthcare in Butte. He was born in Punxsutawney, Pennsylvania Friday, August 20, 1937 to William and Eleanor (Smyers) Fetters. The family moved to Butte when Bill was a child and he attended schools in Butte, graduating from Butte High School. He served his country in the United State Air Force and following his honorable discharge returned to Butte where he worked as a heavy equipment operator for the Anaconda Company. He later worked in Nevada mining and trucking and then worked as a painter until his retirement. Bill loved riding motorcycles and enjoyed the comradery of his friend at Fran’s Bar. He was a great story teller, always keeping them funny and with a possible embellishment or two. He is survived by his daughters and son-in-law, Sheryl and Ed Callahan of Butte, Karla Fetters of Butte, sons and daughter-in-law, William Fetters and his partner, Marlene Burns of Butte, Scott and Kim Fetters of Carlin, Nevada. Surviving grandchildren include Tiffany Fetters, Brittany Fetters, Tyler Callahan, Russell Fetters and Hannah Fetters as well as numerous great-grandchildren. Other survivors include his sisters, Karen Carter Dutton and Janice Brooks and his brother Kurt Fetters all of Arizona. Beside his parents, he is preceded in death by his son Brett Fetters, grandson, Levi Kelsey, brothers, Alan and David Fetters and his sister, Lana Westfall. Cremation has taken place. Memorial services and intermit will take place at a later date. Express condolences at www.wayrynen-richards.com.

The family of William Alex Fetters created this Life Tributes page to make it easy to share your memories.

Send flowers to the Fetters family.