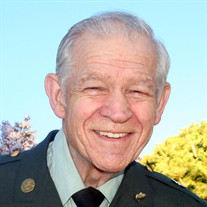 On August 1st, Bill McConnaha closed his eyes on this earth and opened them again in Heaven and looked into the face of his savior Christ Jesus. Bill died of natural causes at the age of 85 surrounded by his family. His life was full of love, adventure, travel, jokes and stories. Bill was an amazing man, husband, father, grandfather, great grandfather, friend. Bill was born in Springfield, Ohio to Pearl and Mae McConnaha, with siblings: Phil, Charlie, Elizabeth and Joyce. As a child, he spent his days helping with his dad’s tire shop and exploring the town on his bike. After high school Bill enlisted in the Army and was stationed in in Seattle. There he met the love of his life, Pat Kerns, an Anaconda Irish lass who was working in Seattle. He was shipped to Alaska for a tour of duty and discharged in 1949. Bill and Pat married in 1949 and began life together in Springfield, Ohio where they were joined by a daughter, Lynn. They soon returned to Anaconda and expanded their family to include another daughter, Donna, and two sons, Neil and Doug. Some of their best memories are of being packed into a station wagon and going on great adventures around the state and the country. Eventually they relocated to Butte in 1971. Bill drove school bus, worked for a grocery store, a tire shop and the Washoe Theatre before finding his ideal position - driving passenger busses. Bill first drove for Greyhound and then began his distinguished career working for the Intermountain Transportation Company. During the 29 years Bill drove for Intermountain, he had various routes around Montana and Idaho and numerous charters around the United States. He had a spotless driving record covering more than two million miles. Everywhere he went, he made friends and shared stories. People felt safe when Bill was at the wheel. Bill served 30 years combined service in the Army Reserves and the National Guard. While in the Army Reserves, he received the Medal of Achievement and the Commendation Medal. He was proud to have served his country. He retired from the military with the rank of Master Sergeant. Bill lived his Christian faith every day. He didn’t hesitate to help someone in need and often went out of his way to help a stranger. After retirement, Bill loved spending time with his family - trips, campouts, or just playing games. He continued to drive bus for AWARE, and was the host for several bus charters. He enjoyed traveling around the country from coast to coast, and experienced an unforgettable trip to Ireland, England and Scotland. He also enjoyed repairing bicycles for his grandchildren and the neighborhood kids, going to garage sales, shopping and visiting at Walmart and telling stories. Bill is survived by Pat, his wife of 65 years; his four children: Lynn Bourne (Jim); Donna Sheehy (Ed); Neil McConnaha (Lori); and Doug McConnaha (Michelle); grandchildren: Jennifer, Scott, Bryan, Kevin, Kelsey, Josh, Riley, Sean, Erin, Min, CJ, Kaylyn, five great-grandchildren and many nieces and nephews. In lieu of flowers, the family requests that donations may be made to Partners in Home Care Hospice, 2687 Palmer Street, Missoula, MT 59808 or the Wounded Warrior Project.

On August 1st, Bill McConnaha closed his eyes on this earth and opened them again in Heaven and looked into the face of his savior Christ Jesus. Bill died of natural causes at the age of 85 surrounded by his family. His life was full of love,... View Obituary & Service Information

The family of William Neil McConnaha created this Life Tributes page to make it easy to share your memories.

On August 1st, Bill McConnaha closed his eyes on this earth and...

Send flowers to the McConnaha family.