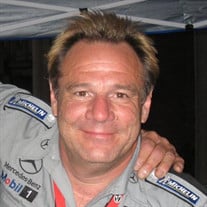 On December 28, 1956 William J. “Bi11” O'Connor was born the first son of George and Viola O’Connor. On October 6, 2O19 Bill exited the world as he had lived-on his own terms. In the 62 years between Bill lived with an intensity rarely equaled. His lifestyle could often be simultaneously admonished and envied! Bill lived a giant life! He traveled, worked and resided in many places, both domestically and abroad. He talked with and rocked with most of the planet. Bill's uninhibited personality, big heart, and generous nature allowed him to make many friends including a core group that he cherished dearly, (you know who you are). He had a never-ending list of interests and curiosities. He enjoyed travel and good food, loved aviation, and was a huge motorsports enthusiast, but his greatest passion was music. Whether it was listening to a good record, running live sound, or simply sharing the comradery of the musical brotherhood, from the time he was a child, through all the ups and downs, music was the one constant. Bill never married or had children. On Father's Day 1966 an accident claimed the life of his younger brother “little” Jim, leaving a tear in the fabric of the family that could never completely be mended. He is survived by his brother Joseph (Rosemarie) who wish to offer their sincere thanks to all of those who tried to aid and comfort Bill during his final days. Painfully, yet inevitably, now it is time to say, Goodbye to the Blade', Saheeya to 'Mr. Bill', and above all; please, rest in peace beloved brother. Cremation has taken place and nor formalized services are planned. Memorial donations in Bills memory may be made to Kiel’s Konnection, 1851 Hancock, Butte, MT 59701.

The family of William Joseph O'Connor created this Life Tributes page to make it easy to share your memories.

Send flowers to the O'Connor family.