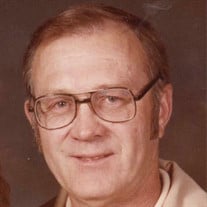 William R. Oase, a longtime resident of Butte, passed away Sunday, July 3rd at the Rocky Mountain Hospice in Helena at the age of 89. He battle a deadly form of lymphoma for the last five years of his life but managed to live four years longer than his doctors predicted. He very much enjoyed living at the home, reading as many as three books a week. Bill was born October 2, 1926 in Superior, Montana to Gus and Alice Oase. Bill was issued a license to drive at the age of nine so he could help his father, a master mechanic, during the depression in the 30's. He was drafted in 1943 and served honorably island hopping in the Pacific Theatre of World War II. He then spent a year in Korea. When he came home he was profoundly changed but so proud of what he and his fellow American had accomplished for the world as a whole. Bill went to work mining in Butte in 1949 learning his trade at the Belmont, Anselmo and Badger Mines. He eventually worked in all the operational mine of the time, finishing his career with a long stint at the Berkley Pit. During slow periods he was often seen driving taxi for City and later the Owl Cab. Bill was well known for his part in Butte's rough and tough spirit during the 50's. He met and married Josephine Knofel and had two children before he met the love of his life, Mary Ann Sirginson. He had two more children with Mary Ann and quite simply resigned himself to the fact that Butte was the only town he truly felt at home. Bill was very proud to be a volunteer fireman for the Boulevard VFD. He was an avid gun enthusiast, master marksman and simply loved the art of pugilism. William is survived by a multitude of grandchildren, great grand nieces and nephews too numerable to adequately list. In short, he is survived by step daughters, Darianne Colaccico of Fordville, North Dakota, Pasty Letourneau of Conrad, MT, his daughter, Carolyn Rasmussen and son Bob Oase both of Oregon and his youngest son, Richard Oase, living in Helena Bill's final wishes were that his remains would be placed along-side his beloved wife, Mary Ann Oase who passed in 2001. He wanted this to be a private family affair. He also asked that no donations be made in his name. He only hoped to be fondly remembered for his small part in the grand accomplishments of a great generation.

William R. Oase, a longtime resident of Butte, passed away Sunday, July 3rd at the Rocky Mountain Hospice in Helena at the age of 89. He battle a deadly form of lymphoma for the last five years of his life but managed to live four years longer... View Obituary & Service Information

The family of William Richard Oase created this Life Tributes page to make it easy to share your memories.

Send flowers to the Oase family.