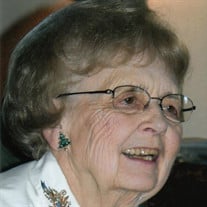 Miss Zona Mae Vander Linde passed away Wednesday morning, January 30, 2019 at the Copper Ridge Health and Rehabilitation Center. She was born Monday, November 30, 1925 in Mitchell, South Dakota to Albert and Freida (Dittman) Vander Linde. She was raised and educated in Emery, South Dakota and graduated from high school in 1943. She worked for the local paper for a brief time then as a telephone switch board operator for Tri County Telephone Company before going to Sioux Falls to work at Northern States Power Company, now Excel Energy. She returned to Emery following the death of her father to assist her 18 year old brother Albert in the family electrical business. When he was called away to the Korean War, she returned to Sioux Falls where she attended business college and embarked upon a career working for an insurance office, until they relocated to Minneapolis, at which time she chose to return to Emery where she worked in a grocery store until her retirement. Zona enjoyed volunteering and helped deliver meals for the Emery Senior Meals program. Later, during the summer months, she volunteered at the Dakota Discovery Museum in Mitchell and the Salvation Army, specifically their food pantry. She was also an active member of The First Baptist Church where she helped with the Sunday school and served as secretary then assistant secretary for many years. She was active in several bible studies in both South Dakota as well as Butte. Feeling the need to be close to family, she moved to Butte in the summer of 2005. Here she enjoyed the company of her niece Judy and her family. Zona had a special way about her, though succinct, she was also very gentle and kind. Memories of cookie baking sessions, or egg dyeing events or the pumpkin carving messes in Zona’s kitchen punctuated with her beautiful laugh will long be cherished in family lore. A voracious speed reader she always could be found with a stack of books close by and a current topic to discuss. Zona is survived by her brother, Albert Vander Linde of Butte, nieces Karen Vander Linde, Judy (Bruce) Schuelke of Butte, Mary (Loren) Bell of Beaverton, Oregon, great-nieces, Courtney (Evan) DeCan of Seattle, Emily Bell of Beaverton and great-nephew, Logan Schuelke of Minneapolis, Minnesota. At her request, there will be no local services and interment of her remains will take place in Emery, South Dakota.

The family of Zona Mae Vander Linde created this Life Tributes page to make it easy to share your memories.